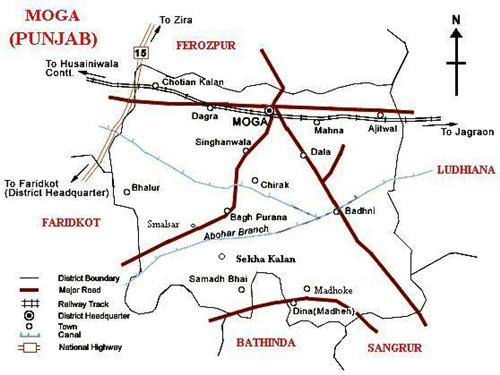 Moga found distinction as a part of Punjab on 24th November, 1995 and was sealed by Harcharan Singh Brar, who was the chief Minister at that time whose efforts made Moga possible. It became the 17th district within the state. But prior to it, it had been a part of the Faridkot District and was nothing more than a tehsil. It now also includes the Dharamkot Block with some odd 150 villages which had been in the Ferozpur Divison. Reaching Moga is easy; it can be accessed through the National Highway 95 which is also referred to as the NH-5 Ferozpur- Ludhiana Road.

The benefactor of Moga is Moga Singh Gill and was later passed on to his two sons- Moga Mahala Singh Gill and Moga Ajit Singh Gill. Interestingly, the Moga District is also known as the NRI district as most Punjabi NRIs belong to Moga who may have moved to UK, USA and Canada. The Sidhu, the Gill and the Brar clan dominates most of the Moga region.

Moga is best known as the birthplace of freedom fighter Lala Lajpat Rai who belonged to the village Dhudhike in the district of Moga. The major tourist attractions of Moga are Dina Sahib Gurudwara, the Kashmiri Park, the Geeta Bhawan Temple and the Nehru Park.

Area and Population of Moga

Moga amounts for 4.42% of Punjab. The coordinates for the area is 30.8 degrees North and 75.17 degrees east. It occupies a total area of 2230 km square. The district of Moga is enveloped by the Ludhiana district in east, Jalandhar district in north, Ferozpur and Faridkot in the west and Sangrur in south.

In accordance with the census carried out in the year 2001, Moga town has 124,624 people in totality of which 54% forms the male population, and 46% is females. It is a 3.65 percentage of the cumulative population of the state of Punjab.

Much like the other parts in the state, Moga too has extreme hot and cold conditions. There are distinct three seasons- summer, monsoon and winters; summer lasts from April to June where the temperature may indicate a rise of 49 degree Celsius, the monsoon extends from July to September receiving the bulk of the rainfall and winters heralds from December to February when the temperatures may slide down to 0 degrees. The average annual rainfall of the district was 234.5 mm in the year 1999.

The following are the physical attributes of Moga:

Among the rivers that drain the area are the five famous rivers of Punjab- the Beas, Sutlej, Ravi, Chenab and Jhelum. Moga finds its strategic place in the heart of the city where Majha is located between Chenab and Beas and having Ravi on both sides. Some of the forests are being converted into cultivable lands and are known as Bar. The cities are fast developing here.

Moga has an average elevation of 217 meters. The mountains close to Moga is the Manimahesh Kailash Peak, the Mount Hanuman Tibba, the Deo Tibba, Mount Rubal Kang and the Nag Tibba.

Although there are no extensive significant natural forests, there is abundance of bushes, grasses and shrubs.

There are 20.00 square kilometers of forests in Moga but is fast being used and cleared up to accommodate the bustling and the growing urban spaces.

There are some minor mineral quarries in the area among which mining of brick clay had been carried out in the total area of 1.67 hectares.

Dams and Canals in Moga

Moga has its share of dams and canals which crisscross the state of Punjab. Much of the agriculture of the land is sustained with irrigation through canals and tube wells which makes it possible for the agriculture. Noteworthy is the Nangal Dam in Roopnagar district which irrigates land of the Moga district too.